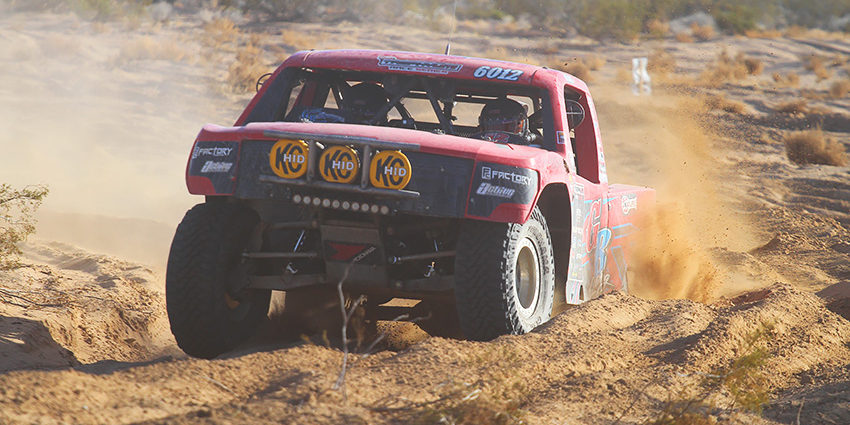 Every year the MINT ‘400’ continues to grow and this year was no exception. A new race format was designed this year allowing for 2 days of racing and 2 days of the legendary contingency row on Fremont St. This year, the TrophyLite race would come on Saturday afternoon which was coordinated by TrophyLite owner Jason Cobb. So, what’s different? NO grand prix finish! Being in the second race of the day TL teams didn’t have to start their 3rd lap before the first overall car of the race crossed the finish line. This year our race started at 1pm and 10 teams would make the trip to take part in the historical experience known as the MINT 400.

First off the line would be the Herling Racing 6061 entry driven by Joe Herling. Joe grabbed a 2nd place finish in his first race in the truck at the Parker ‘425’ and would be looking for a similar performance coming into this race. Starting 2nd was the red GBRacing 6012 with Greg Bragg behind the wheel. Greg jumped to the front by getting around the 6061 early into lap 1 getting clean air and navigating around some vehicles from the morning race. Travis Williams has won the last two races and has proven his ability to run up front. Starting from the 6th position, his fast pace has moved him though the pack and put 6077 truck just behind Bragg in 2nd battling with Joe in the 6061 for position. Unfortunately the 6061 would have an issue with the transmission at the end of lap 2 and ultimately ending their day.

Larry Schmueser III in the 6081 entry started from the 7th spot and moved their way up to 4th and ran solid all day. Larry is learning the truck and is really showing his speed and confidence out on course. the 6081 held strong and took home a 3rd place finish.

Travis and Greg would run 1 and 2 physically for 2 of the 3 laps and at the finish line Greg and the 6012 would have just enough to hold off the 6077 of Williams by just under 1 minute. On more than one occasion Bragg has been on the other side of those results and being bumped from the top spot by just seconds. TrophyLite congratulates Greg Bragg and the GBRacing team on their second class win since joining the class in 2017. Travis picked up his 3rd consecutive podium finish and retained his hold on the points lead.

David Carey in the 6006 truck had a solid day and picked up a 4th place finish! David has recently purchased the Spitz Motorsports chassis and is really getting to know his way around the desert.

Our TrophyLite Rental Team of Jason Bergstrom drove the 6088 to a 5th place finish. Both teams did great on such a tough course. THe TrophyLite pit support crew was on point all day and with little to no issues both trucks were able to finish the prestigious MINT 400.

Rick Herling would bring the second Herling TrophyLite in for the 6th spot.

There were four teams that had issues and didn’t make it to the finish. Chris Wardle was running solid in 5th for most of the day but had a nasty roll damaging the back half of the chassis. The guys are ok, but chose to call it day and save the car. Joe Herling had some problem with the transmission/torque converter. Joe Fitos driving the 6063 had the converter bolts back out, sheer off and ultimately lost the motor. KJ Hawkins had an issue, possibly a bad crank sensor but the engine wouldn’t rev any higher than 2500 rpm. They ended their day early at Pit A.

The next race of the season takes us to Primm, Nevada for race 1 of the Regional Race Series the SNORE Battle at Primm on April 11th – 14th. Then TL teams will head to race 3 of the National Series the BITD Silver State 300 May 2nd – 5th. We hope to see you there!